Posted on September 3, 2008 by teninchwheels

I’ve just spent a week in the Highlands with my brother. We go away every year. I make him look at old trees and he makes me climb up enormous hills. Walking back to Pitlochry on our way back from the Edradour distillery (more about that later) I spotted this chap in a wheat field. Such elaborate scarecrows seem quite rare nowadays. The most common are often nothing more than sheet plastic tied to a pole. The modern farmer ploughing his hedgeless prairie in a GPS-enabled New Holland tractor hasn’t time to make scarecrows. And he’s too worried about EU quotas and yields.

Of course, scarecrows don’t actually work. When we were in France earlier this year, I saw one with a bird actually perched on its head. So why bother with them? In areas where the land is less intensively farmed, it could be that farmers put up scarecrows almost subconsciously – just because they and their forbears always have done. There’s even a theory that the classic arms-outstretched scarecrow figure is a folk memory of ancient surveyors called ‘dodmen’ – the ‘dod’ being the surveyor’s pole. Indeed, in Berkshire scarecrows are called Hodmedods, which might mean ‘hold my dod’. If you want to really push it, there’s even a school of thought that the Norfolk dialect word for snail – hodmadod – was drawn from the snail’s antennae looking like surveyor’s poles. Hmm. There’s a further theory that the Sussex hill figure, the Long Man Of Wilmington, is a dodman. To be fair, he really does look like a surveyor. More than a snail does anyway. 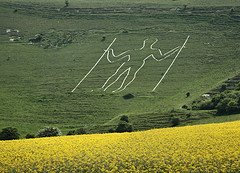