Posted on December 22, 2008 by teninchwheels

We didn’t make our usual visit to Bavaria this year, so Mrs TIW and I went to have a look at Hyde Park’s version of Christkindlmarkt. Most of the stalls and a lot of the visitors were German, which led to a bizarre experience of feeling like we were really at the Chinese Tower Market in Munich’s park, the Englischer Garten. Nobody does Christmas as well as the Germans, and the atmosphere had been transplanted to London very well, with alpine hut stalls and numerous rides I recognised from Oktoberfest. We left feeling very Christmassy indeed. There’s been a trend in recent years for British towns to hold ‘International Markets’, which in my experience has meant French stallholders punting Maille mustard for twice the price it is at Tesco. There was a bit of this going on in Hyde Park – 5 quid for a stollen anyone? Thought not. It was 4 quid for a pint of Paulaner Dunkel in a wobbly plastic cup, 4 quid for a Thüringer wurst and a laughable £4.50 for a glühwein, plus deposit for the mug – the sort of prices that should they be tried in Munich or Cologne would have the locals burning down the Rathaus. 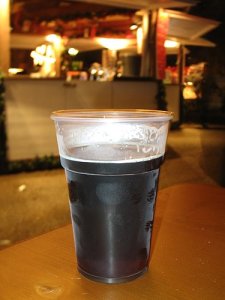