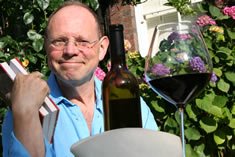 Until a year or two ago, I was a Guardian reader. I’d first started reading it at art college when Pentagram and David Hillman’s groundbreaking redesign brought me to it, but I stayed with it because I liked the paper’s insight, balance and the genuine genius of Steve Bell. I even worked for them for a bit. A couple of years back, the Guardian stopped being merely handwringing and liberal, and became preachy and accusatory. The feeling I got was that if I didn’t agree with the editorial, I must be The Enemy. Also, it seemed to me that the paper was slipping into a parody of itself. Their saturday supplement in particular only seemed to be of relevance to about 25 women who live within half a mile of Angel tube station. And then you’d get the occasional gem like the (in)famous Max Gogarty blog. Anyway, I don’t read it any more.

And then you get something like This beaut from Malcolm Gluck, their extraordinarily smug wine writer, chiefly famous for his old ‘Superplonk’ article and website extolling the bargains to be found in the wine aisles of supermarkets.

Other than saying that pound for pound, craft beer is of a much higher quality than almost any wine, It’s difficult to know where to start, so I won’t bother. Just read it for yourself.

Designer, photographer and Vespa-fixated pub bore. Born in Yorkshire, living in that London these past 20 years. Get in touch at teninchwheels@gmail.com, especially if you'd like to send me some free beer.
View all posts by teninchwheels →
This entry was posted in Declining Newspaper Sales, Poor Journalism, Tomorrows Chip Paper. Bookmark the permalink.