Posted on February 10, 2009 by teninchwheels 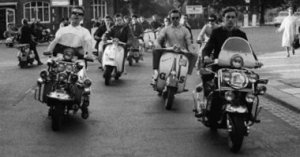 The public perception of the scooterist is of a bloke on a Vespa or Lambretta with so many mirrors and lights that it looks like a Christmas tree. This image is due in large part to pictures taken by the news photographer Terry Spencer, who covered the “battles” between Mods and Rockers during the 60s. The ‘Christmas Tree’ scooter was – apparently – a short lived fad amongst a group of South London Mods. Short lived I would imagine, because covering an underpowered shopping bike in acres of heavy chrome is plain daft. Daft unless you want to travel everywhere at 10mph worrying about rust. However, Spencer captured the fashion at its peak and the ‘Christmas tree’ became an icon copied the world over.

Hollywood couldn’t invent Terry Spencer. He was born in Bedford in 1918 during a Zeppelin bombing raid. Joining the RAF in 1939 he was twice made a POW and at one time held the record for surviving the lowest parachute jump in history – 30ft over the Baltic Sea after his Spitfire exploded, the blast opening his ‘chute for him. He was also the first pilot to use the wing of his aircraft to flip a V1 flying bomb in flight, which caused it to crash. This got him the lifelong nickname ‘Tip In Terry’.

After the war he flew a single-engined ‘plane to South Africa (without a radio or even proper maps) where he started an aerial photography business and flirted with diamond smuggling. He started to work for Life Magazine in 1952, and over the next 20 years photographed troublespots like The Congo, Nigeria (where a request to try and visit the Sultan of Kano’s harem prompted him to send the telegram: “ONLY WOMAN PHOTOGRAPHER CAN ENTER HAREM OR POSSIBLY EUNUCH STOP NOT EVEN FOR LIFE MAGAZINE AM I PREPARED MAKE SACRIFICE NECESSARY FOR LATTER STOP”), Vietnam, Algeria, Indonesia, and Cuba where he covered a disastrous CIA operation to rescue defecting Soviet agents. In 1963, Spencer was persuaded by his teenage daughter to photograph an emerging band, The Beatles, which became a feature in Life just before the band’s total conquest of the USA. Spencer’s time with the Beatles amounted to almost 5,000 negatives, some of which were published in 1994 as It Was Thirty Years Ago Today. When life folded in 1972, Spencer became a freelance, continuing almost until his death on February 8th this year. His wife of 62 years, Lesley, died within 24 hours of him.

Spencer claimed that after surviving WW2 he never worried about his personal safety. Indeed, he was only ever hurt when attacked by Paul McCartney after discovering his secret farm on the Mull of Kintyre, years after their first meeting.

Designer, photographer and Vespa-fixated pub bore. Born in Yorkshire, living in that London these past 20 years. Get in touch at teninchwheels@gmail.com, especially if you'd like to send me some free beer.
View all posts by teninchwheels →
This entry was posted in Merlin engines, Stiff Upper Lips. Bookmark the permalink.

2 Responses to >Years Of Living Dangerously