Posted on August 4, 2010 by teninchwheels

>I never thought I’d say this, but Stratford is changing from the ragged patch in the torn backside of the old trousers hanging in the dilapidated shed of the East End, into somewhere fairly … nice. The pace of change at the Olympic Park is stunning, and the neighbouring Westfield über-development looks almost finished. It’s even going to have a John Lewis, so at least the folks from Upper Leytonstone and Wanstead won’t have to spend 20 minutes on the Tube to go to Oxford Street. They’ll just spend 45 minutes sat in their Audis getting into Westfield’s car park. The other day in Stratford’s unyieldingly grim old shopping centre I heard someone say excitedly “We’re going to be the Shepherd’s Bush of the East”. Damned with faint praise, but there’s no denying that E15 is improving. It’s improving from a very low base, mind. 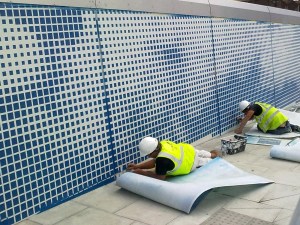 These blokes were painting hundreds of tiny squares onto the new Angel Lane bridge. The mural is almost finished, and looks to be some sort of half-tone image, presumably celebrating ‘the spirit of the East End’. Or something. I don’t know what the men in hi-viz thought of the job, but one of them was whistling the Patsy Cline tune ‘Crazy’.

Designer, photographer and Vespa-fixated pub bore. Born in Yorkshire, living in that London these past 20 years. Get in touch at teninchwheels@gmail.com, especially if you'd like to send me some free beer.
View all posts by teninchwheels →
This entry was posted in Leytonstone, London, Stratford. Bookmark the permalink.

5 Responses to >Round Our Way