I’ll try to get to the end of this post without using the tired old pub reviewers word ‘gem’. But I’ll struggle.

I first heard about the Blue Bell about three years ago, after my mum and dad found the place on one of their visits to York. IN PUB U’D RLLY LUV – came the text from my 70-year-old-dad, whose messages are apparently ghostwritten by a Walthamstow yoot – BLUE BELL INNIT.

Our visit last saturday afternoon was almost thwarted by a handwritten ‘private party’ sign on the front door. A bloke with a cig cupped in his palm sidled up and theatrically whispered “Go on in. Yer all right. That’s to keep idiots out”. So, officially recognised as not being idiots, in we went – back to 1903, the year the the pub was last given a makeover. Much has been written about the BB’s untouched Edwardian interior, which has survived thanks largely to an ain’t-broke-don’t-fix-it approach from the family who ran the pub for decades. The last family licensee, Edith Pinder (by all accounts a redoubtable character – “she used to sit here like Mrs Haversham”), retired in 1992. Doubtless it was present owners Pubmaster who stuck the godawful sign above the marvellous tiled exterior. 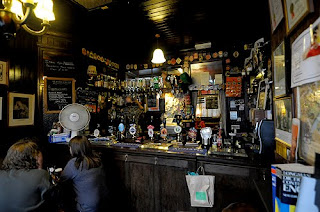 Everyone remarks about the size of the Blue Bell, which has a street frontage of exactly 13 feet wide. It may be small for York, but it’s not a lot smaller than the Mitre in London, and it’s almost cavernous compared with the pocket-sized Boltmakers in Keighley. There are two rooms, front and back, split by the bar and connected by a dark, narrow corridor with its own serving hatch, presumably once there for off-sales. There are six hand pumps and a rack of continental bottles – La Chouffe and St Bernadus among them. We settled for an excellent Roosters Leghorn and a perfect Camfell Flame, which was a new one to us. The other beers were reliables like Deuchars, Landlord and the ubiquitous Black Sheep. I suspect this is more to do with Pubmaster than the tenants, who have an obvious enthusiasm for beer – the Blue Bell hosts one of the country’s smallest ale festivals. The landlady reportedly knows the names of over 200 of her regulars, who were a mix of young and old and all backgrounds and classes. We were drawn into conversations that involved the whole room, and its possibly a good thing that we we only had time for a couple of pints, otherwise we’d still be in there now. The Blue Bell is one of those things that leaves your soul singing to know it exists, like Bolton Strid or the Merlin Engine or the Polar Bear or the Brooklyn Bridge. It’s a much loved, much-used boozer, welcoming to everyone. Except idiots. An almost perfect pub, then, and oh, alright – a gem.

Designer, photographer and Vespa-fixated pub bore. Born in Yorkshire, living in that London these past 20 years. Get in touch at teninchwheels@gmail.com, especially if you'd like to send me some free beer.
View all posts by teninchwheels →
This entry was posted in Beer, pubs, travel, york, Yorkshire. Bookmark the permalink.

5 Responses to >Blue Bell? Would.