>At Last, At Last 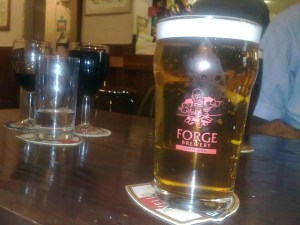 You’re probably sick of me banging on about the dire state of beer in Bideford. I know I am. Despite the town being in part of the country studded with micro and regional breweries, it’s hard to find a decent pint in the towns and villages on the Torridge Estuary. True to form, I had three miserable pints at the Kingsley, the local in the village near to where my in-laws live. Doom Bar, Bombardier and Exmoor Gold. All as dull as ditchwater, in that annoying condition where you can’t quite justify returning them to the bar. The Kingsley is a Cask Marque pub, which only reinforces my opinion that the Marque can’t be trusted as a badge of reliability. It was a similar story down the hill at the (un-Marque) Village Inn, Westward Ho. Another grim pint of Doom. Eggy and flat. Could it be that drinkers in Bideford forgotten what a beer in good condition tastes like, and just put up with whatever is served?

It got better, though. On the friday of our visit we had one of those nights which starts with the notion of a couple of brewskys and home for tea, but ends up with a kebab, cab, and a sore head. We were in the White Hart, a 17th century pub on a backstreet off Bideford quay. It’s a tiny place that’s had it’s ups and downs over the years but is now seems to be back on form. The pumps usually have a couple of the local (and unexciting) Jollyboat ales and a guest, which on our visit was Hartland Forge IPA. It was without doubt the best pint I’ve supped in twenty years of visiting. Prime condition, fresh and bitingly hoppy – everything an IPA should be. Haven’t been that surprised since I saw Bill Clinton sat in a pub in Covent Garden. So that was that, from 5 until closing. Sadly, Dexter, the ancient collie that used to loll about in front of the fire like an animated rug has passed away since our last visit. One of the Jollyboat pumps was dedicated as a memorial. Cheers, Dex. 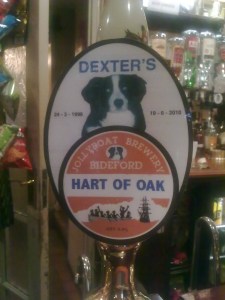 Designer, photographer and Vespa-fixated pub bore. Born in Yorkshire, living in that London these past 20 years. Get in touch at teninchwheels@gmail.com, especially if you'd like to send me some free beer.
View all posts by teninchwheels →
This entry was posted in amazing, Beer, Devon, pubs, Surprising. Bookmark the permalink.

6 Responses to >At Last, At Last