Posted on November 18, 2010 by teninchwheels

Well, whaddya know? Rumours have been circulating for months, but it looks like Piaggio really are going to start manufacturing the much-loved and much-missed Vespa PX again, in all its air-cooled, manual-gearboxed glory.

The last PXs were made by Piaggio in 2007. Officially, their demise was brought about by the engines not meeting emissions legislation. Apparently, the new incarnation will still have a two-stroke motor, with all the famous blue smoke (and particulates) kept in check by a new catalyser. There’s also a mention in some of the press that the new scoot will have ‘dual rear shocks’, which might at last stop ‘Vespa arse’ on rides longer than half an hour.

SInce the last PXs were sold, anyone wanting a traditional scooter has been forced to get an Indian clone, the LML star*, which must surely have taken a significant chunk of Piaggio’s market. No doubt this was a major factor in the decision to re-introduce the much-loved scooter, but whatever the reason – it’s good to see it back. The new PX will be on sale next year – this is one of the new ones. Nice flares. 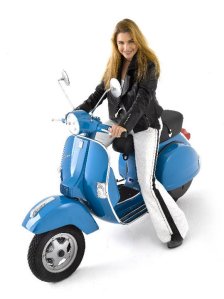 * one of LMLs main UK dealers is Eddy Bullet. They have the worst website you’ll ever see. Go on, have a look.

Designer, photographer and Vespa-fixated pub bore. Born in Yorkshire, living in that London these past 20 years. Get in touch at teninchwheels@gmail.com, especially if you'd like to send me some free beer.
View all posts by teninchwheels →
This entry was posted in Piaggio, PX, Scootering, Scooters, Vespa. Bookmark the permalink.