Posted on November 24, 2010 by teninchwheels

>Never thought I’d look forward to visiting a pub near a train station. Finally got to the Euston Tap for a late-afternoon visit on monday. At first, the place was empty, except for an extremely posh young man who appeared baffled by the beer menu (“Um, what’s a nice beer?”) and a grizzled CAMRA vet in a faded beer festival shirt stretched over an impressive belly. Twenty odd-beers on the blackboards, reasonably priced and numbered like a Chinese restaurant*. Two fridgezillas creaking with bottles. We liked the place instantly. 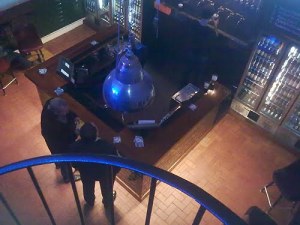 No sign of Boak and Bailey’s snooty barmaid, thankfully – the lad behind the bar was smiley enthusiasm personified. Mate had a Bristol Stout (“excellent”) while I settled for a Lagonda, the first Marble beer I’ve really enjoyed. My pint was none the worse for a slight haze, something that seemed to affect the other light-coloured ales we saw served up. Our only real complaint was that the place was freezing. Even though the barman was in a t-shirt – everyone else had their coats on. Another gripe was that we’d left it too late to stay for more than one before we had to go and meet the wives.

The Euston Tap is full of potential and deserves to do well – and might even prove to be something of a kick up the arse for the capital’s beer ‘scene’. Range+decent prices = happiness. More of this sort of thing, please.

*You’re meant to order by number, apparently. We were ignorant of this, but the barman didn’t mind. Perhaps just as well – I even get baffled by the ordering system in Nando’s.

Designer, photographer and Vespa-fixated pub bore. Born in Yorkshire, living in that London these past 20 years. Get in touch at teninchwheels@gmail.com, especially if you'd like to send me some free beer.
View all posts by teninchwheels →
This entry was posted in Beer, London, pubs. Bookmark the permalink.