Posted on February 20, 2012 by teninchwheels 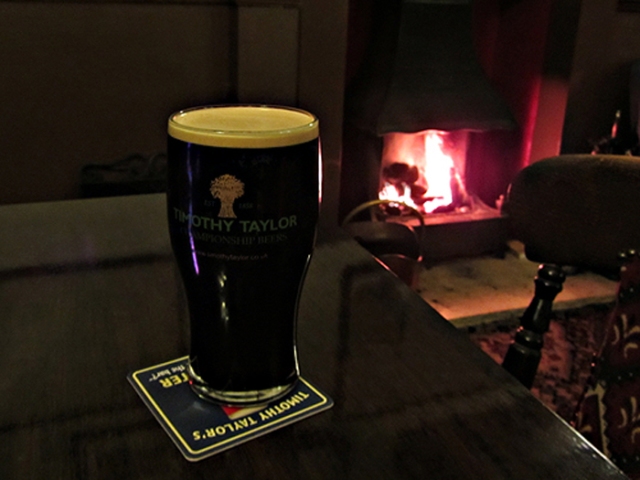 Prior to WW2, the family business (on my dad’s side) was haulage. And until my granddad rode off to Skipton and acquired their first lorry (teaching himself to drive it on the way home) it was all horse-drawn. My granddad was a real horseman. In fact, the first time my grandma saw my granddad he was sat on a horse, trotting past the mill gates where she was chatting with her friends. Every summer he’d take his covered wagon (‘It looked like a cowboy’s chuck wagon’) off to Appleby and return with a few gypsy-bred horses. Along with the haulage, they had a contract for snow ploughing, a particularly dangerous job. There is a tale of Granddad’s collie digging him out of a deep snowdrift he’d fallen into on the moorland road between Oakworth and Colne. Another sideline was demolition.

The bit of Keighley where West Lane and Oakworth Road meet was once called The Pinfold. Most local histories use the prefix ‘notorious’ when mentioning the place. It was an overcrowded, squalid slum – the gutters running with entrails and blood from nearby abattoirs. In the 30s my granddad, his brothers and their horses were given the contract to pull the area down. ‘They weren’t bad people in the Pinfold’ my grandma says, ‘but the Pinfold was a bad place’.

All that remains of this once-troubled locale is a pub, the Brown Cow. Three or four of the Pinfold’s cottages knocked together, it probably started out as a domestic beerhouse. It’s been in the Taylor brewery estate since 1901, and to be fair, for most of that time it’s been considered one of Keighley’s rougher pubs. In a town with a lot of tough men doing tough jobs, Taylor’s pubs weren’t always as thoroughly wholesome as they are now, and a reputation is hard to shake. As recently as the early years of this century, the Brown Cow was considered out-of-bounds by many. It was that pub on the edge of town that you never saw anyone enter or leave. But given good management, a pub can be rehabilitated. And that’s just what happened when Barry and Carol Taylor (no relation to the brewers) took over in 2003.

An ex-drayman for Taylor’s and a former soldier, the first thing Barry did was clear the ‘idiots’ out, as he put it. And as he’s the size of an American fridge freezer, it would have been a very daft idiot who argued. Then came one of the country’s first smoking bans – and then a ban on swearing. Word got around that the Brown Cow had changed. Now a trip home for me isn’t complete without a visit.  There’s the full Taylor cask range and  two guest pumps, typically with something from Moorhouse, Bateman, Acorn, Ilkley, or Salamander. Barry and Carol have picked up an impressive number of awards since taking over – several of the local CAMRA Pub Of The Season awards and runners-up CAMRA Yorkshire Pub Of The Year in 2008, losing out (by one point, it is alleged) to the mighty Kelham Island Tavern. It’s the textbook, traditional West Yorkshire town pub (albeit run by a Lancastrian).  No fancypants nu-keg stuff. No gimmicks. No arguments about sparklers or definitions of craft. Just reliable ales in first-class condition. The Carling tap was binned through lack of interest in lager – though a Kozel fount has appeared in recent months.

The Boltmakers – a ten minute walk away – gets most of Keighley’s pubby glory (see here for an article I guest blogged for Fuggled) especially for their incomparable pint of Landlord. But it’s time the Brown Cow took its share of that fame, especially for their pint of Landlord’s sibling, Ram Tam. This was once a seasonal winter warmer, though in recent years this sultry, sweetish, mellow, nutty and fruity beaut has become so popular it’s now brewed year-round, though it’s one I keep for cold winter nights.

I was in the Brown Cow a fortnight back. Putting the world to rights with friends i’ve known almost my whole life, with my back to the fire and savouring that dark ale in that excellent pub. Beer seldom tasted so good.

3 Responses to The Darkness