After The Gold Rush

Having The Greatest Show On Earth just down the road led to some surreal moments in E11. Missile launchers on tower blocks. 9ft tall Australian athletes browsing cameras in Argos. Waiting at the crossing by the Turkish shop for a peloton of Kazakh cyclists to glide past. American silver medallist Lashinda Demus endeared herself to locals by getting the 257 bus back to her digs in Leytonstone each night and the cheers for Mo Farah and Yorkshire’s own Jess Ennis could be heard in our garden. Last night’s fireworks rattled our windows.

Now the party’s over East Londoners will be asking what the legacy will be. There is no doubt that Stratford has been dramatically transformed – it’s been like seeing the neighbourhood waster brought back from near death. We were lucky enough to get down to the Olympic Park a couple of times during the games and looking carefully beyond the stadia, the mega-McDonalds and Kapoor’s tower it’s still just possible to trace where the scrapyards, cut-and-shut car dealers, Fridge Mountain and the skid-row hookers once were. Whether all this will benefit the locals who put up with seven years of disruption remains to be seen – regenerated areas of London have a nasty habit of pricing out less well off residents. Nearby Leyton High Road has benefitted from a makeover too – the cynic might call it a Potemkin Village – which got the Daily Mail saying nice things about the area, rather than having one of their periodic rants about spade-bearded East End radicals. 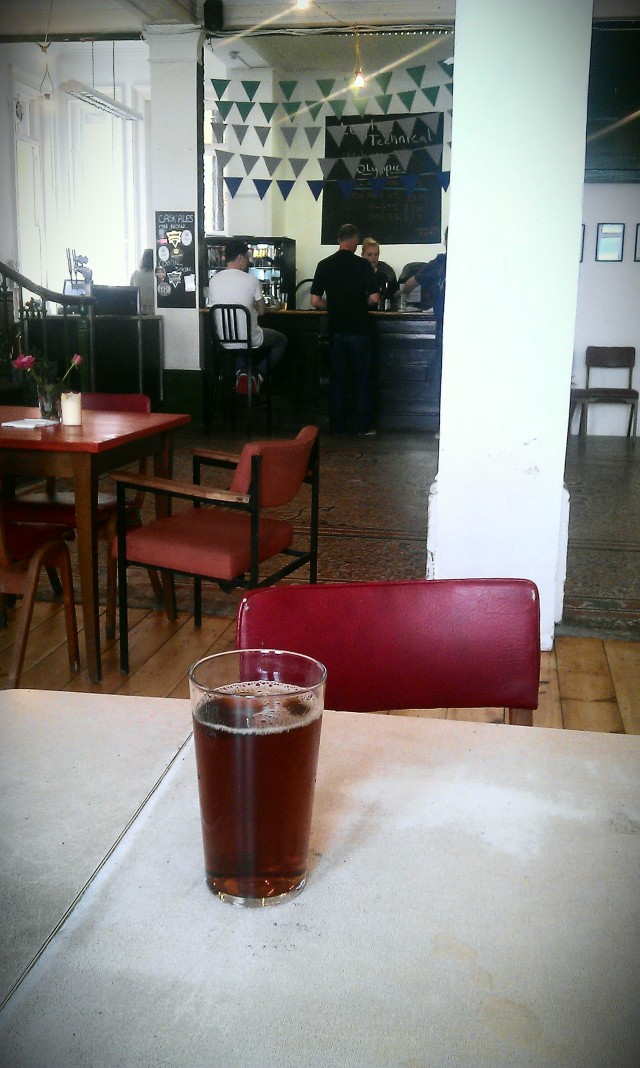 During the games Leyton even got a pop-up pub. The Leyton Technical is courtesy of Antic – the folks behind the mighty Red Lion – and makes good use of some unused, airy rooms on the ground floor of the Mansard-roofed Victorian library. When we dropped in Olympic events were being projected onto the walls, watched by a small crowd of Danes and Canadians. Beer was on stillage like a mini-festival and priced according to strength. ELB Pale was pretty good – if sort of homebrewy. London Fields Love Not War was malty and vinous. Redemption Urban Dusk was opaque and sour, but changed with no drama and an “I’m so sorry. I don’t know anything about… ales” from the barmaid, as if she was somehow to blame for a barrel coming to its end. We signed the petition to keep the Technical a permament boozer. Hopefully Waltham Forest Council will have a rare moment of sense and make it so.

After that we decided to re-assess the nearby Birkbeck Tavern. Despite its long residence in the Good Beer Guide, the Birkbeck has not always been home to consistently good beer, which is one reason we hadn’t visited in a long time. The pub is now under the custodianship of the good folks behind What’s Cookin’, one of East London’s best music nights. The beer had certainly improved, too – Dark Star Hophead was absolutely sublime. The affable Norn Irish bloke behind the bar – all Amos Brearly sideburns and western shirt – told me how much work they’d put into turning the pub around, starting with barring the idiots. The outside had got a facelift and the beer range was extending. Unfortunately, the pubco has gone bust and the Birkbeck is up for sale at a piddling (for London) £575k. The future of the pub hangs in the balance – although rumours of a ‘family brewer’ showing an interest are doing the rounds. Leyton might gain a pub and lose a pub. We’ll just have to wait and see.

3 Responses to After The Gold Rush