The farmer knows why we’re here. There could be no other reason why a carload of Brits would be stood in his lane looking out over a landscape so flat you imagine that you can see the curvature of the earth. ‘Yes’ Says M. Fermier. ‘Many, many British died here’.

Somewhere in these fields my Grandad’s brother Joe was badly wounded by the shell that killed his mate. Just over there, perhaps. Or maybe even right where we’re stood. There’s no way of knowing for sure. Two years of research, educated guesswork and reading and re-reading of unit diaries has got us here. And it was here. And It can only have happened on the 6th, 7th or 8th of October 1918. That’s when Joe’s battalion, the 15th Durham Light Infantry were part of the assault on this section of the Beaurevoir Line, the last of a series of German defences collectively known as The Hindenburg Line. Fighting had by now left the trenches and was in the open, in pursuit of the retreating enemy.

You look again at the smooth landscape, once thick with barbed wire, concrete bunkers and well-sighted machine guns. Behind the screen of trees there would have been artillery. The DLI war diary says they were even harassed by a German aircraft and took fire from a bypassed wood. Not many places here to get out of the way of bullet or bomb. Despite only having been in France since August, Joe had survived at least two actions by the time he got here. One of these engagements was at Grandcourt, where on our last visit we’d mistakenly believed he’d copped it.

M. Fermier’s home had been the DLI’s objective after securing the nearby hamlet of  Montecouvez. I was stood in the lane photographing his property when I became aware of a man in my viewfinder. He was waving. Was he waving me away? They have very robust privacy laws in France. No. He was beckoning.

‘Hello.’ I say in my dismal French. ‘ We’re English’. As If we could be anything else. ‘My uncle was injured near here during the Great War’. He smiles, shakes my hand and takes us into the farmyard, introducing us to his wife. ‘The farm was destroyed in the fighting. Most of this is rebuilt.’ He says. ‘Just the stable blocks are original. Come on inside, I’ve got something to show you.’

On the wall of their cool, welcoming kitchen is a photograph of their home before the battle. The farm was described on British maps of the time as a chateau. And that’s what it was, an elegant and expensive house. Three German soldiers stand by a covered supply wagon, with what might be a crate of beer at their feet. I bet this was a cushy billet until autumn 1918.

Mme. Fermier opens a door. ‘Come on down here’ she says ‘there’s more’. We follow her down the stone steps into the cellar, perhaps 10 feet underground. ‘The cellars survived the war.’ She points: ‘These were made by German POWs’. There, above the jars of pickles and bottles of wine are a series of murals. A staff car leaving the farm lane. Two aeroplanes – one on the wall and a very faded one on the ceiling. ‘Made by an aviator’ says Mme Fermier, chuckling at our open-jawed astonishment. Later, my dad says I looked like I’d ‘been electrified’. On the wall by the steps is a drawing of a guestbook, with signatures of some of those held here. It’s not hard to feel that the men who made these were glad to be out of the fighting. 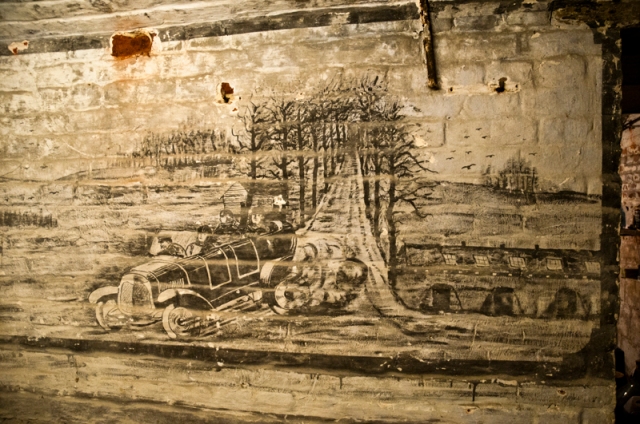 Back in the kitchen we tell M. and Mme. Fermier about Joe. Tall and quiet, the eldest of five brothers and a sister who, despite the wound – a head injury that kept him in London’s Millbank hospital for months  – outlived them all, dying in 1980. We tell them we’d just placed a memorial cross on the grave of the friend who was killed, who we believe was a Keighley lad called Smith Clayton. ‘Ah yes.’ says Mme. Fermier quietly. ‘He’s one of our boys in the cemetery just down the road’. They have long memories in France. 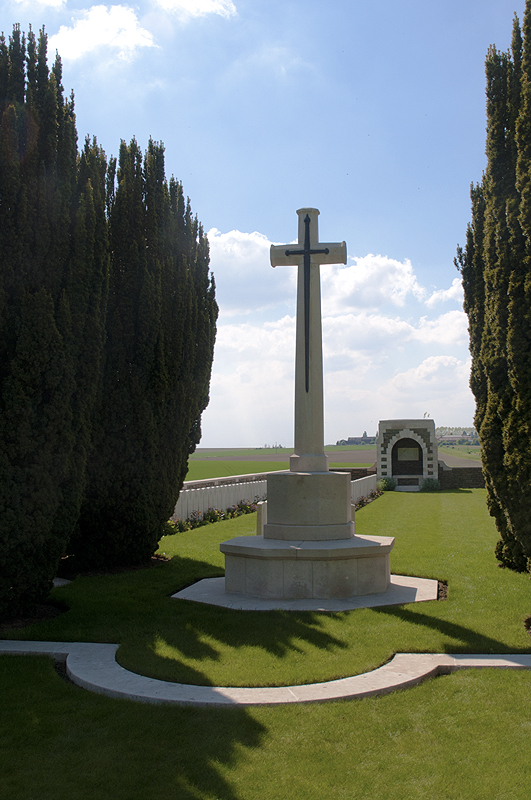 4 Responses to Time Torn Off Unused